MID AFTERNOON TRASH!: Zebra-Tell Me What You Want

Here is a great little rock song from the early80s.
Posted by Unknown at 3:25 PM No comments:

BAD NEWS! The comedy troupe who brought you The Young Ones created a Spinal Tap-esque band in the mid 80s and ran with it for a few specials. They are contained on one video, if you can still find it. I watch this annually. When it originally aired on Mtv back in the 80s me and all my friends freaked out at how it gets to the heart of what bands deal with on the lower end of the spectrum, and how brilliant the comedy is played out. I urge you to seek this out.
Posted by Unknown at 5:33 PM No comments:

Posted by Unknown at 3:14 PM No comments: 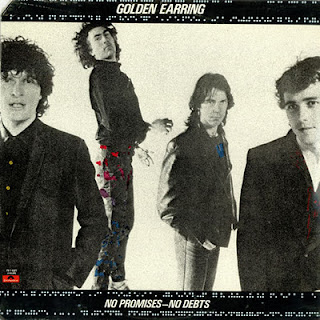 Here is a sampler of the career overview I am giving the South Holland prog slammers Golden Earring in TRASH #22:

GOLDEN EARRING- No Promises-No Debts (1979): I have been rather over the moon about the band Golden Earring as of late. I have become quite excited over singer Barry Hay's amazing pipes. Being a singer myself, I love great singing. Especially guys like Barry Hay-who have a facility to sing just about anything they damn well please. I do not want to go fully into a Golden Earring tirade-that will be in the next, soon to be released TRASH #22. I just have to say that I got this particular record recently and have been cranking it. For most of the 1970s the band performed really dark, progressive hard rock both nasty and neat, many songs reaching the seven minute mark, or more. These guys liked to play. And then punk comes along and they do this compact S&M record. Three and a half minute songs- and really violent imagery. Guitarist George Kooymans produces, and he must have gone through some horrible, shitty relationship (him or Barry), cause the lyrics are fucking harsh- "Snot Love In Spain," "Save Your Skin," "Sellin' Out"- you get the point. The song "Need Her" is a mean little song; "Need her like a knife stickin' in my back/Need her to get me off the right track." Damn. Opener "Heartbeat" is a wicked strut, a very cool rock song about, uh, a hot, fat cock that can take care of business. But the song itself is sophisticated enough to allow you to invest in that as a viable answer to something so vulgar, so crass. It is constructed in such a way as to pull you into the framework before you notice the lacivious nature of the lyric. Pretty cool. "Don't Close The Door," is my favorite cut on this one, a full on late night swagger, on the road kind of medium bodied rocker that has a a film noir tinge (which this band may do better than anybody else-see "Twilight Zone," "Vanilla Queen," and "When The Lady Smiles" for further evidence.) I am really loving these guys. Like UFO or Nazareth or Lynyrd Skynyrd or Gillan-once you get past the popular beliefs-both bad and good-and just dig in heavy, you hear things that maybe earlier history was not tuned for quite yet, leaving us an endless future of fun and excitement like this to experience.
Posted by Unknown at 2:48 PM No comments: