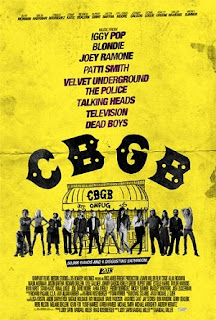 Unlike Oliver Stone's 1991 film The Doors, the new film about the now legendary CBGB club is a complete piece of shit. The Doors film- as bad and inaccurate as that was- has at least taken on a camp value that is mostly hilarious and fun to watch unravel before your eyes; This CBGB film is so devoid of intelligence or art or plotted pose the only emotion left is contempt, which quickly melts into a sad hypothesis that it may be a propaganda film created by establishment conservatives, to confuse and confound any one interested in the actual ideas and environment from whence this music came.

I could start by picking on the shit bag film making- the flat cinematography, the poor costuming, the hideous make up,  the way in which the film makers seem to disregard any sense of congruency in favor of squeezing out enough of a commercial to sell this era to a new generation of know nothings. This film plays like an extended GAP advertisement for punk. Considering that Taylor Hawkins- the drummer for mall rock stalwarts Foo Fighters- plays Iggy Pop- terribly, mind you- should be a dead give away that this is not a serious film made by anyone who wants to make great entertainment- rather, it seems to have leaked from the bowels of business interests hell bent on draining any sense of danger or excitement, in order to produce a nice, neat, clean package of yesterday nostalgia. The marketing department must be having an orgasm.

Not all is lost, however. The music itself is wonderful-  imaginative, fantastic, galvanizing- it is no mystery as to why the filmmakers have wallpapered this visual calamity with great songs of the era- even if many of them are totally out of synch with timeline and incident. Alan Rickman, as CBGB proprietor Hilly Kristal, brings the only true acting weight to the proceedings, the only performance compelling enough to watch. Donal Logue- playing Kristal's partner- is passable- but the rest of this cast is much like the dog shit that littered the CBGB floor. Much of the cast renders their famous counterparts nothing more than Mickey Mouse teeny boppers with quaint directives rather than the mutant rejects of a society too pretty to tolerate such ugliness. Malin Ackerman as Debbie Harry is particularly awful, avoiding Harry's sweet, adorable sexuality in favor of grinding like a strip club slut. Mickey Summer as Patti Smith is also particularly bad- yet, Justin Bartha as Stiv Bators may be one of the worst portrayals of a known entity I have witnessed.

The story itself is interesting enough to be told, absolutely. Yet, a dramatization such as this- artless, colorless, mediocre- is the wrong way in which to present such a thrilling tale. There is a joy attached to knowing that this music has become part of the fabric of American Pop culture, finally- that all of those sick, crazy, disgusting, strange, weird ideas have made it to the mainstream- but at what cost? When it all gets muddled and mashed into this modern day hybrid of robotic dialogue and ready made trend bait, it tends to cancel out the importance of the thing itself. And even if it is mere entertainment in the end, a film made about it should be equally entertaining. This CBGB movie is not.
Posted by Unknown at 11:52 AM No comments: