REJECT THE SYSTEM WITH RIOT GIRL RUIN: The Punk Singer (2013) 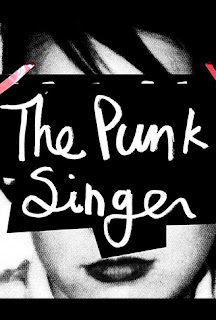 The Punk Singer is a documentary about Kathleen Hanna, singer of feminist punk rock band Bikini Kill. It details her life in music and art up to the present day. Inside the first 25 minutes I was already acting like a shitty, bullish man- taking ownership of the feminist punk narrative in my own mind, shaming this documentary for lack of historical perspective in regards to this riot girl revolt; Anti-Scrunti Faction, Frightwig, The Neo Boys, Lydia Lunch, M99, The Gits, The Slits, Delta 5, The Raincoats, X Ray Spex, Diamanda Galas- just to name a few. All feminist artists- some far more extreme and bold than any in the Riot Girl Movement. I was chaffed at the very notion that the film begins it's narrative as if that stuff had never existed- that the only historical perspective they offer is the way back 60s Gloria Steinem connect. The cover for Patti Smith's Horses LP did as much for freeing young women's (and men's) ideas about sexuality as a dozen fanzines.

Once I had gotten this out of my brain space, I sat back, shut the fuck up and realized that this is one person's story that explodes into a thousand, maybe a million, other people's stories. That it is a story we can all relate to makes it that much more endearing. The struggle to be heard above the din, to escape our childhood dramas, to be loved, to give love, to create, to help, to force the world to see our vision of ourselves rather than the one assigned to us at birth. The documentary itself is not as stunning and deep as you may want- lacking fluidity, style, a cohesive story telling directive that could have expressed more the explosive, thrilling, intoxicating magic of this time period, the riot girl movement, the pulse and throb of the music. It misses this opportunity entirely. It has a flat, matter of fact vibe- one that engages, but never engrosses. The film also feels one sided- no women from any other scene are represented, or comment on the riot girl movement and how it may have affected them during this period. It would have been nice to see a wider perspective.

As you come to the reason Kathleen Hanna retired from performance in 2005, it becomes a fragile, human drama, and the entirety of the film and all of it's attendant problems are rendered moot, as you see this woman reach to become herself again. The final frame is given to our subject matter- still tough, still energized, still ready to remind those who forget, you don't need anybody but yourself and those who got your back. The rest is just bullshit hype.
Posted by Unknown at 1:04 AM No comments: